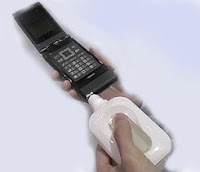 DMFCs produce electricity from a reaction between methanol, water and air. The only byproducts are a small amount of water vapour and carbon dioxide, so DMFCs are often seen as a greener source of energy than traditional batteries. Another advantage is that they can be replenished with a new cartridge of methanol in seconds.

Toshiba claim that a 50ml cartridge could refill the cell about 15 times, which means that about 3.3 mL of liquid methanol is enough to power the phone for twice as long as comparable batteries.